***SAFE 05/28/2015*** 3 YEAR OLD SIFU LIVED WITH A SMALL DOG, LOVES TO PLAY AND IS GENTLE! HE WAS GIVEN UP WHEN HIS OWNER DIDN’T HAVE ANYONE TO ‘CARE FOR HIM’ when he was sick. SIFU has a condition very common in cats who have had a history of poor nutrition-, stomatitis. This condition can be controlled by using low/no grain food and eliminating dry food from the diet-but SIFU’S previous owner probably figured he could just go out and get another cat easier than bring his friend who he’s had for 3 years to the vet. Now SIFU is in grave danger and is most probably at the top of the ‘list’ tomorrow as he’s FIV+. This means nothing at all-this writer has 2 FIV+ cats that live with other non FIV cats-good food, lysine and regular check ups can help any cat, and it sounds as if SIFU was loved only when he didn’t have any ‘problems’. This is beyond sad-the look on SIFU’s face says it all-he needs a friend to save his life, who won’t give up on him. This is a cat who will love you with all he has-you only have to say you’ll foster him and step up and say ‘yes’. SAVE SIFU!!! He gets along with small dogs and is neutered and clean!!! HE NEEDS YOU! 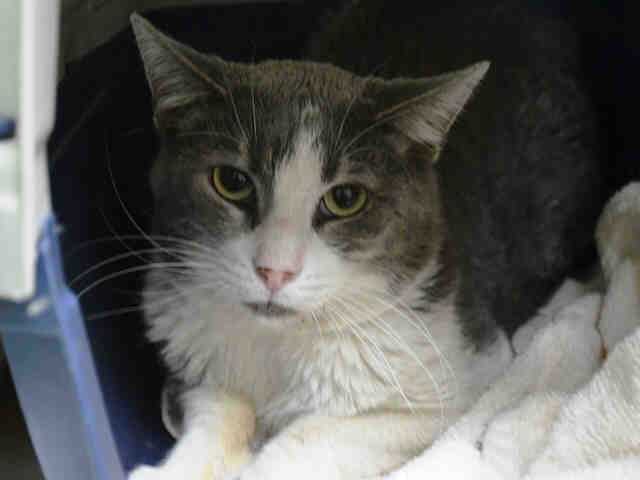 05/23/2015 PET PROFILE MEMO
05/23/15 16:07 Basic Information: Sifu is a 3 year old gray and white male cat. Sifu is has both his front and back claws. Owner had Sifu since 9/11/2011 from a pet store. Owner believes Sifu is sick and he has been to the vet for this reason. Owner had to surrender due to pet health and no one to care for him. Social Life and Personality: Sifu lived with adults most of his life and never been around children. Sifu is relaxed, respectful and tolerant of everyone in the household. Owner stated Sifu lived with other cats and he is very tolerant towards them. Sifu lived with a Shih Tzu and he was respectful towards the Shih Tzu. Sifu is an indoor cat and activity is low since he’s been cat. Owner stated Sifu is playful, mellow, friendly, talkative and affectionate. Behavior Issue: Owner stated Sifu never bite or scratched anyone to owner’s knowledge. Sifu is afraid of taking baths and never had his nails trimmed. Sifu likes to be picked up and held. Sifu likes to walk in carriers and isn’t bothered by being disturbed while sleeping. For a New Family to Know: Sifu is litter box trained and use to uncovered litter boxes. Sifu likes to play with balls and scratching post made out of carpet and cardboard. Sifu likes to be on the couch or in the window. iSfu eats wet food called Friskies twice a day. Sifu likes to rub against peoples legs and beyond friendly owner stated. Intake Behavior: Upon intake Sifu was calm and relaxed. He scanned negative for a microchip. When being handled for photo and to be collared he growled and his ears were low.

05/26/2015 BEHAVIOR EVALUATION – EXPERIENCE
Exam Type BEHAVIOR
Owner Profile: Sifu was bought into the care center by his previous owner due to having health issues and no one to care for him. Sifu lived with adults most of his life and never been around children. Sifu is relaxed, respectful and tolerant of everyone in the household. The previous owner stated Sifu lived with other cats and he is very tolerant towards them. Sifu also lived with a small dog and he was respectful towards the dog.The previous owner stated Sifu is playful, mellow, friendly, talkative and affectionate. Sifu is litter box trained. Notes: At the time of the assessment he was displaying conflicted behavior, comes to the front of the kennel but low growls, interacts with the Assessor, solicits attention, is easy to handle and tolerates all petting. Sifu is displaying behavior appropriate for an experience cat owner. Reaction to assessor: comes to the front of the cage, soliciting, rubbing against the cage front while low growling When spoken quietly: stays at front, continues soliciting attention (1) Reaction to door cage opening: remains soft & relaxed (1) Reaction to touch: solicits petting and attention (1) Try picking cat up: tolerant of this type of handling. Placement Determination: Experience

***TO ADOPT THIS ANIMAL THROUGH THE PUBLIC ADOPTION SITE, PLEASE GO TO THE FOLLOWING LINK AND SCROLL DOWN TO BOTTOM TO LOG IN AND RESERVE THE ANIMAL. THERE WILL BE A $50 DEPOSIT REQUIRED. THIS OPTION IS AVAILABLE UNTIL 12PM TOMORROW. http://www.nycacc.org/PublicAtRisk.htm ***

For more information on adopting from the NYC AC&C, or to find a rescue to assist, please read the following:http://information.urgentpodr.org/adoption-info-and-list-o…/

If you are local to the Tri-State, New England, and the general Northeast United States area, and you are SERIOUS about adopting or fostering one of the animals at NYC ACC, please read our MUST READ section for instructions, or email [email protected]
Our experienced volunteers will do their best to guide you through the process.

*We highly discourage everyone from trusting strangers that send them Facebook messages, offering help, for it has ended in truly tragic events.*

To view all current activity, please see our primary site. As always, thank you for supporting Urgent.

To view the current six months of activity, please see our primary site.

Get Status on Any Cat