***GONE *** 06/06/15 PIXIE NEEDS SOME PIXIE DUST TO SAVE HER FROM ACC! OWNER SURRENDERED BECAUSE SHE IS BETWEEN HOMES AND NOW PIXIE WILL BE KILLED BECAUSE OF IT!!! PLEASE SAVE THIS SWEET HOME SWEET HOME GIRL! PIXIE is 4 years old and up til a few days ago, was sleeping in her own bed with her person. PIXIE hates the ACC, and has of course been ‘aggressive’ towards the vet, as many cats who have come from a home, and then poked, prodded and stuffed into a little cubicle cage are. The ACC has no time for cats who aren’t with their program of adjusting immediately and now PIXIE’S life will end tomorrow at noon-that is, unless you decide to say ‘yes’ and offer to foster PIXIE. I have heard the term ‘fractious’ and ‘aggressive’ with many cats, including those this writer has adopted and fostered from ACC and it means nothing. Many cats are frightened in new environments and the look of confusing and not understanding on PIXIE’S face says it all. You can change that. This is a sweet girl who simply needs a home-will you offer her one-either forever or foster til forever to save her life? Please? PIXIE needs you! 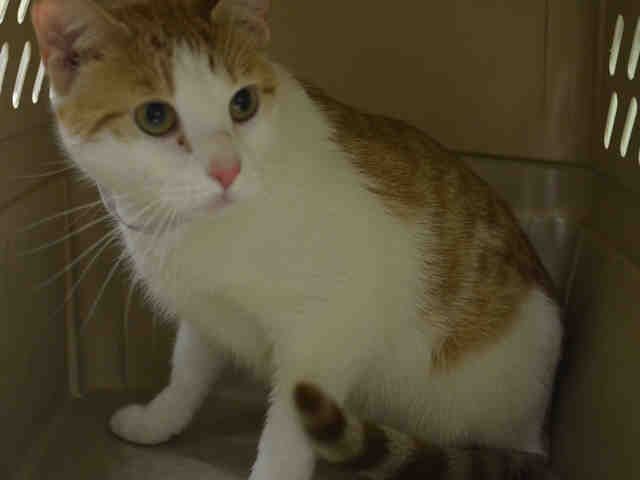 05/23/2015 PET PROFILE MEMO
05/23/15 19:41 Basic Information Pixie was brought in as an Owner Surrender, client stated that she was currently in between homes, and is unable to take Pixie with her. Owner says Pixie is 4-years old, and has been with her owner since she was a year old. Client says Pixie has no injuries or health concerns, and when asked what she likes most about Pixie she chose that she is energetic and observant. Personality & Behavior Pixie is described as medium active, and owner describes her as playful, assertive, and mellow. Owner says Pixie hasn’t been around children much or other cats but when kept with a small sized dog Pixie was tolerant. Owner says Pixie is litter-box trained, and has been kept indoors only. Owner says when in the mood Pixie enjoys play but she is usually quiet and independent. Owner says she has had no prior incidents with Pixie scratching or biting anyone. Owner says Pixie doesnt like to be bathed but once inside will deal with it and “suffer in silence”. Owner says she hasn’t attempted to brush Pixie or trim her nails. Owner says she usually enjoys being held, and is unbothered with being placed in a carrier. For a New Family to Know Pixie is used to the clumping litter with a covered litter box. Owner says she enjoys balls, stuffed, and chasing toys. Owner says she doesnt have a scratching post, but usually scratched on the couch. Owner says she rarely seeks attention at home, and during play will be gentle but can give small scratched when too excited. Owner says during car rides Pixie meows the whole ride. Client says Pixie is free-fed dry food, and will get wet food as a treat. Owner says Pixie sleeps in her own bed in her room, and is unbothered if disturbed while sleeping. Behavior during intake Pixie seemed fearful during intake. Her pupils were dilated, and her body was flattened. Pixie allowed me to pet her, and accepted food. Pixie allowed handling and didn’t show aggression, but towards the end of intake she started growling low when I attempted to place her back inside of carrier.

05/27/2015 BEHAVIOR EVALUATION – EXPNOCHILD
Exam Type BEHAVIOR
Initially Pixie solicits petting and attention, but after a few soft passes over the body she begins to swat at the assessor. This may be a sign of petting-induced aggression, where repeated physical contact results in discomfort for the cat, or it may be a sign of overstimulation. As a result of this observed behavior we recommend adopters who are familiar with signs of behavioral arousal and agitation in cats, so that interactions can be ended before Pixie becomes reactive. Treats should be used to reward appropriate responses to physical attention. Pixie’s former owner describes her as playful, assertive, and mellow. Also, says Pixie hasn’t been around children much or other cats, but when kept with a small sized dog Pixie was tolerant. However, she doesn’t have a scratching post, but usually scratched on the couch. She may have some behavioral issues that will need to be addressed in the home. Reaction to assessor: Pixie looks neutral in her cage when approached by the assessor. Reaction to door opening: Pixie remains sitting upright by the front, alert with soft eyes. Reaction to touch: Pixie allows the stroke, but becomes agitated with the touch and swats at the assessor’s hand then slowly retreats to the back of her cage. Placement determination: Experience / no child Pixie tolerates attention and petting but may be stressed in the shelter, and may be intimidated by small children. Due to the behaviors seen in the care center, we feel that this cat will do best in a calm, quiet home with experienced cat parents and without children.

☆★ TO ADOPT THIS ANIMAL THROUGH THE PUBLIC ADOPTION SITE, PLEASE GO TO THE FOLLOWING LINK AND SCROLL DOWN TO BOTTOM TO LOG IN AND RESERVE THE ANIMAL. THERE WILL BE A $202 DEPOSIT REQUIRED. $150 WILL BE REFUNDED ONCE PROOF OF SPAY/NEUTER IS SUPPLIED.http://www.nycacc.org/PublicAtRisk.htm☆★

For more information on adopting from the NYC AC&C, or to find a rescue to assist, please read the following:http://information.urgentpodr.org/adoption-info-and-list-o…/

If you are local to the Tri-State, New England, and the general Northeast United States area, and you are SERIOUS about adopting or fostering one of the animals at NYC ACC, please read our MUST READ section for instructions, or email [email protected]

Our experienced volunteers will do their best to guide you through the process.

*We highly discourage everyone from trusting strangers that send them Facebook messages, offering help, for it has ended in truly tragic events.*

To view all current activity, please see our primary site. As always, thank you for supporting Urgent.

To view the current six months of activity, please see our primary site.

Get Status on Any Cat